Ikea, a multinational company that was founded in Sweden, is known for the modernist style of furniture and home appliance that they sell and has been the largest retailer worldwide for at least the last 10 years.

As of 2017, Ikea has 411 locations across all nations.  But one store is particularly special, the Ikea in Catalina, Italy.

Employees have welcomed guests in the store whole year round.  Customers and patrons are likely to be greeted by homeless dogs who found shelter just when the temperature outside has become less friendly.

The dogs just love the air conditioning when it’s too hot to be outside during the summer days and they also find comfort when it’s freezing.

Clients who are looking for dining tables are usually entertained by curled up canines underneath.  And those who are planning to buy living room sets are amused with napping pooches who made themselves comfortable either on the carpets or rags.

Giovanna Pecorino, a shop owner that sells vintage clothing in Catania, is one of the many people who love to take photos of the pups whenever she pays a visit to the store.  She said “I know them (dogs) well; they just give a sense of peace.”

Another fanatic of the furry staff, Linda Chartier Scala, who have moved from Rhode Island, USA to Noto, Italy, also takes photographs of the dogs and uploads them to her social media account.  On each post, she praises the establishment and its teams for opening their doors to the homeless dogs; providing them shelter and giving them food and water. 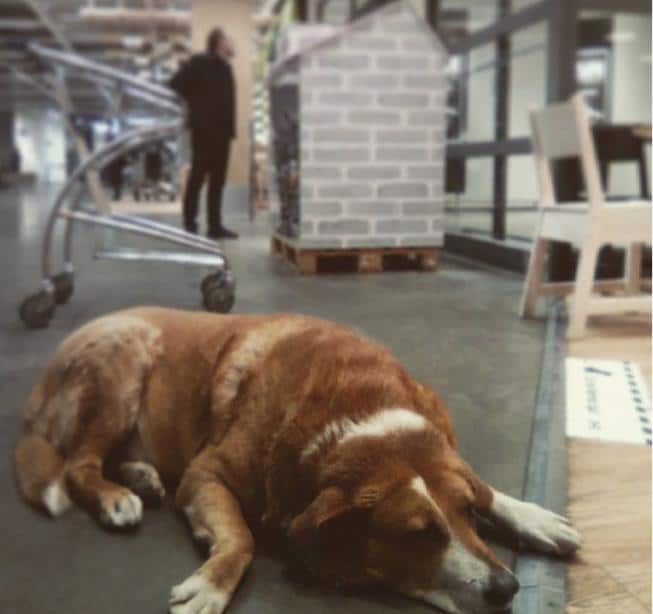 Some shoppers have admitted to dropping by at the store even if they don’t have anything to buy.  They make their way to simply say hi and shoot the photo of the day with their favorite pooch.

Ikea’s canines are not just fed; they are sanitized and professionally taken cared of  by an animal welfare group.  And the attention they get from every customer?  They simply love it.